If you’ve been hiding under rock or you’re just a little kid. You have to know that the Batman Arkham series is made for the age group of about 5 – 15 year old premature little boys. Unfortunately due to how the bat mobile now has guns. The ESRB has rated it M. But don’t be fooled by that rating thinking it’s made for a mature mindset because it’s not. It’s still about selling plastic toys to foolish boys.

The graphics you’re seeing the trailers and more are all being shown from PC footage cranked up to max ultra settings and CGI cut-scenes. In this day and age you need to impress your target audience with pretty graphics that doesn’t even represent the game at all. But buy it on PlayStation 4 or Xbox One and you’ll be left missing all those special bells and whistles. Graphics don’t make a game but in the case of Batman Arkham Knight it’s really the only thing it has going for it which if you’re a console peasant you’ll surely to miss out on.

3. Batman: Arkham Knight Will Not Be On Xbox 360 And PlayStation 3

Remember when you spent 300 dollars on the last generation hardware thinking it was going to be supported for the next couple years like Sony and Microsoft promised! Nope, won’t be happening here! So you better get on your hands and knees and say MAMMY please put a reserve-mortgage on the house! I need a 400 more dollars so I can play Batman: Arkham Knight on PlayStation 4!

2. Batman: Arkham Knight Is Only 80% Of The Total Product

Batman Arkham Knight which is published by Warner Bros. Interactive Entertainment and developed by Rocksteady Studios has the business over pleasure partnership. Meaning when you spend that hard earned 60 dollars on this game that you probably got from mowing your mommy’s lawn. You’ll only be getting back about 40 dollars worth of content give or take. Content will be stripped out of this game and put behind a pay wall. Welcome to Warner Bros. Interactive Entertainment where they rape your wallet and your daddy’s because you’re probably 12 if you buy this!

The Combat in Batman Arkham Knight will be nothing new or innovative. You have to remember that since the Batman Arkham series is made for young tots. The gameplay also needs to be dumbed down to a sickening degree so 5 year olds can play it. It’s boring, plain and simple. But hey! If you like mindlessly hitting X and Square for 8 hours… Then maybe you should purchase this game because it will be right up your alley.
I’ve been Dr. Craigheadpro. Don’t forget to like this video to open other peoples eyes or dislike it if you’re pouting in your little pillow. I’ll catch you next time! 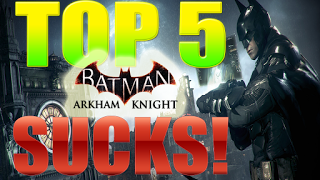 One thought on “The Top 5 Reasons Why Batman Arkham Knight Will SUCK!”